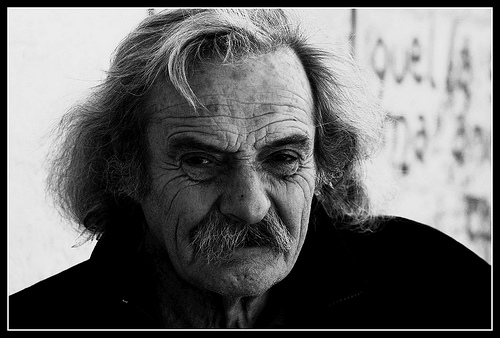 When Agneta Falk and I were invited, a couple of months earlier, to participate in the Festival, we were eager to do so notwithstanding the dangers because we had been in email touch with Sabah Jasim, an Iraqi poet and comrade since 2006, who had translated poems written by both of us. It was Sabah Jasim who I invited to the San Francisco International Poetry Festival in 2007 and who was cruelly refused entrance into the U.S. (after 23 days in Damascus, Syria, where he went to obtain his visa, he received it on the last day of our Festival in San Francisco, though Kareem James Abu-Zeid, a brilliant young translator of Arabic poetry, translated some of Sabah’s work and presented it at one of the Festival’s venues.

So there was the meeting between us all at the Basra airport where, after much bureaucracy, Aggie and I received our visas for Al-Marbid. We finally met Sabah in person and drove with him and two other poets, Furat Salih and Thamir Sa’id, to the Golden Tulip Hotel, a very modern structure, where we met Mudhafa Al-Rubai, the organizing overseer of the poets invited from other countries. On the way in we’d gone through a couple of checkpoints and noted that a car proceeded ours in which two at least and sometimes three armed Iraqi security forces were ever present. The same would hold for the large modern bus which carried all the guest poets to different venues: we became accustomed to the sight of soldiers with kalishnikovs or handguns leading the way in cars, and guarding the front of the Hotel. Basra had been “secured” some time ago by the British and American forces. But all of Iraq is still a war zone and security is very heavy.

At the Hotel I was asked by Thamir Sa’id to do an interview, in which Dr. Adel Al-Thamary translated the questions to me, which were largely about my views on Poetry.

Next morning the poets all piled into the bus provided by the Ministry of Culture—which had organized the Festival under the direction of 34 year-old Aqeel Mindlawie—and we went into Basra to the Petroleum Cultural Center Hall, a vast domed-like workers’ Hall where, after ceremonious speeches and an extraordinary dance ensemble called the El Basra Group for Public Folklore Arts, which performed breathtakingly with women drummers and male dancers, the poetry readings began.

The poets read a couple or three poems each. Iraqi poets often read in dramatic style with great expressivity and sonority. At each of the three-day venues there would also be included the guest poets from other countries. I read two poems on that first morning,—“Path” and “One Day”— with Sabah Jasim reading the Arabic translations he’d made, after I read a brief note of solidarity concluding with a “Long Live the Iraqi Poets!”.

In the large space in the rear of the auditorium—tables laden with books of poetry and prose, large art and photo exhibitions, and many people interviewing the poets for news- papers, radio and television. The Iraqis are hungry for communication with the outside world—it was a central underlying theme of the Festival. Indeed, on the second day Agneta Falk gave no less than seven interviews after she read her poem on Israel/Palestine, “O Hate”, and the poem on a British prostitute, “Shivering Mountain”—with Sabah Jasim reading the translations he’d made of them as well. She also read a poem she’d written at the Festival, in memory of the Babylonian poet Ja’fr Hadjwal, who died on the train carrying him to the very Festival.

After the first venue, the bus took the poets to the riverside statue of Shaker Bader or Al-Aysaayab, an impressive towering monument to one of the founders—with two women, Nazika Mala’ka and Lameea Abbas Omara, working independently and simultaneously—of the Free Verse Movement in Iraq, which began in the 1940s.

From that statue and across the Arab River, one could see Iran.

The other guest poets included two from Italy—-Anna Lombardo and Alberto Masala; Eric Sarner from France, though he lives at present in Uruguay; Kamal Akhlaki from Morocco; Sejer Andersen and Kristen Bjornkjiflr from Denmark; Bayan al-Safadi from Syria; Maurilio de Miguel and Angel Petisme of Spain; and Osman Ceviksoy, Necdet Karasevda, Imdat Avsar, Ayten Mutlu and Ali Akbas from Turkey.

Apparently the poems I’d read had appeared on National television the first morning and I was asked to read at the Translation School of the University of Basra on the second day. I’d thought the request was part of the Festival but apparently heads had to get together—security-wise— because the university was not on the Festival venue. But I was cleared to read to a large group of about 150 in a hall at the University. At that event I read a whole ensemble of poems including “New York, N.Y” and “Mother” but it was “The Quntzeros Arcane” which I’d written about the war in Iraq that gave me one of the greatest pleasures of my life, reading it to those incredibly receptive students of the English language . It was my own personal highlight of the Festival, but the collective sense of harmony in poetry at the Festival is what has made Al-Marbid such a new inter-national wonder.

Afterward I was told by Khadin Al-Ali, the professor of that large class, that I had been the first poet from another country to read at the Translation School in seven years!

At the evening session at Autba-Bin Ghazwan Hall on the second day of the Festival we all were treated to stirring Mendelsohn and Tchaikowski by the National Symphony Orchestra, brilliantly conducted by Kareem Wasfi, prior to the poetry readings that continued filling the air with Iraq’s finest verbal sounds and its desire to became part of an international community. At this session and others, I had a chance to meet young Iraqi poets and comrades, largely through Sabah’s being on hand to bridge the language difficulties.

On March 25, readings continued at Al-Shuhada (Martyrs’) Hall in the morning, and at the evening and final session once more in the Petroleum Cultural Center Hall the newspaper of the Iraqi Communist Party (which won 4 seats in the recent elections), called The People’s Road, was on hand, and I was humbled to see a large photo of me next to a general article (or so Sabah told me) about the Festival.

Afterward the Council-General of Basra invited all the guest poets to a dinner in the garden of the Gold Tulip Hotel. The celebration spilled over into March 26, which, as it happened to be Agneta Falk’s birthday, was celebrated after breakfast in the Hotel dining-room, with songs being sung in Italian, Danish, Turkish, Spanish, French, Moroccan Arabic, American, and Aggie sang a Swedish lullaby. It was a truly international finish to a Festival that spread its wings outward, beginning to make its claim of belonging to the international struggle against the evils of globalization. Long Live the Poets of Al-Marbid in All the Years Ahead!